Bit 360 Screwdriver changes bits quickly and easily with a twist! To load a new bit, simply pull the it, twist it and push it back in and a new bit is loaded! It's really that easy!

You don’t need to bring all your tools when you have this 360 Twist-Bit Screwdriver to replace almost all of them. It has six easy-to-change bits (or you can load your own) that are placed in its specifically designed slots. Changing the bit is simple and easy. Just slightly twist it, load the new bit that you want to use and your 360 Twist-Bit Screwdriver is ready to go!

Tired of losing your drill bits? Don’t you wish you had all of your screwdrivers in one place at the same time? Wish changing bits was easier? Well the Bit 360 Screwdriver is the solution to all of your problems!
This high performance screwdriver takes all of the hassle out of conventional multi-bit screwdrivers. With Bit 360 Screwdriver’s easy to change design, you’ll never lose another drill bit again. Each bit is also magnetized so you won’t ever have to deal with losing your screws either! 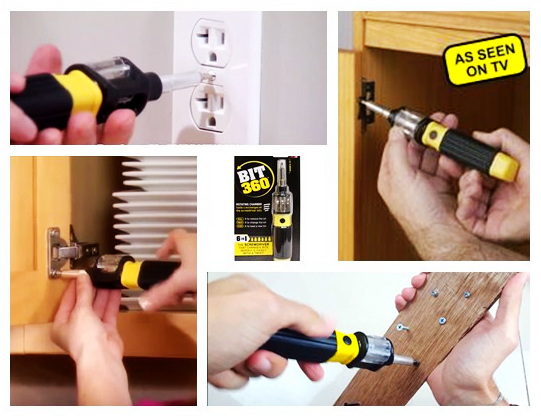 The BIT 360 Screwdriver is an easy-to-use tool everyone should own. Whether you are a professional or a weekend warrior that likes to do their own repairs, this item will prove an invaluable addition to your collection. Changing out bits is a simple process, all you have to do is twist to remove and then twist on the bit you want to replace it with.

The secret to this magnetic tip screwdriver is the rotating chamber that holds six different bits, preloaded and ready to use. Just pull to remove the bit from the tip holder, twist to select the desired bit and push to load the selected bit and it’s ready for use.

You can even use the bits that you already own. This As-Seen-on-TV screwdriver comes with a removable chamber that makes it easy to switch the parts around while its magnetic tip helps to hold screws in place while you work.

How to Use Bit 360 Screwdriver

The 360 twist 6 in 1 screwdriver has a rotating chamber that holds & exchanges all the screwdriver bits, changes bits quickly & easily with a twist. Simply pull it to remove the bit, twist it to change the bit, & push it to load a new bit, includes 6 common screwdriver bits or you can load your own, no more losing bits or misplacing them, made to withstand all types of wear & tear. 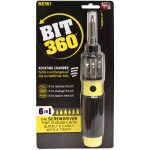 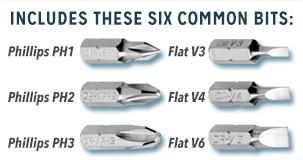